The persistent uncertainty associated with the US-China trade war and the threat of a global slow-down weighed on markets in 1H19. A change in the US interest rate outlook provided some support to Emerging Markets flows in 2Q19, as investors searched for yield.

In sub-Saharan Africa (SSA), inflation decelerated, currencies stabilised, and interest rates moderated. Inflation averaged 9% across the markets in which the group operates. Although Angola and Nigeria recorded inflation in the double digits, period-on-period inflation eased in both countries. In Angola, the continued depreciation of the Angolan Kwanza (AOA) kept inflation at elevated levels. Zimbabwe transitioned to the Real-Time Gross Settlement (RTGS) Dollar as its primary currency in February 2019. Since its introduction, the RTGS has devalued significantly resulting in a spike in inflation. Electricity shortages further exacerbated a difficult operating environment.

Within PBB SA, the mortgage loan portfolio grew in line with the market. Average monthly mortgage disbursements equated to more than R3.7 billion, 17% higher than 1H18. The investment in our Vehicle and asset finance (VAF) capability led to an increase in motor disbursements of 18%, to R17 billion, period on period and positive market share gains. The personal unsecured lending portfolio grew 6% supported by the successful launch of our online origination capability to existing customers in February 2019. In June 2019 online disbursements represented 23% of the total personal unsecured disbursements. The business lending portfolio grew at a slower pace of 4%, as low levels of business confidence translated into lower business lending demand.

PBB AR’s loans to customers grew 17% in CCY to R70 billion, underpinned by the successful execution of its business-led strategy. Business lending remains the largest contributor, at roughly a third of the portfolio, followed closely by mortgages, primarily in Namibia, and personal unsecured lending.

Robust new business disbursements in VAF and personal unsecured lending led to higher stage 1 and 2 provisions relative to December 2018, partially offset by model enhancements in mortgages and early arrears collection capability improvements in the card and personal unsecured businesses. While the NPL ratio remained stable period on period, the protracted legal processes in mortgages and challenging property environment resulted in an increase in the mortgage lending NPL ratio. NPL coverage showed a marginal reduction on the back of changes in mix and loss expectations.

In CIB, Investment Banking’s (IB) momentum continued from 2018, resulting in double digit loan book growth from 30 June 2018 to 30 June 2019. The business originated R92 billion in loans in 1H19, supporting SA corporate expansion into Africa and clients in East and West Africa. Underlying growth in CIB gross loans and advances to customers, including HQLA, was 16%. CIB provisions declined 7% due to lower stage 3 provisions. The main sectors impacted were Consumer, Power & Infrastructure (P&I) and Telecoms, Media & Technology (TMT). In AR, impairments were raised in East Africa in the P&I and Consumer sectors. 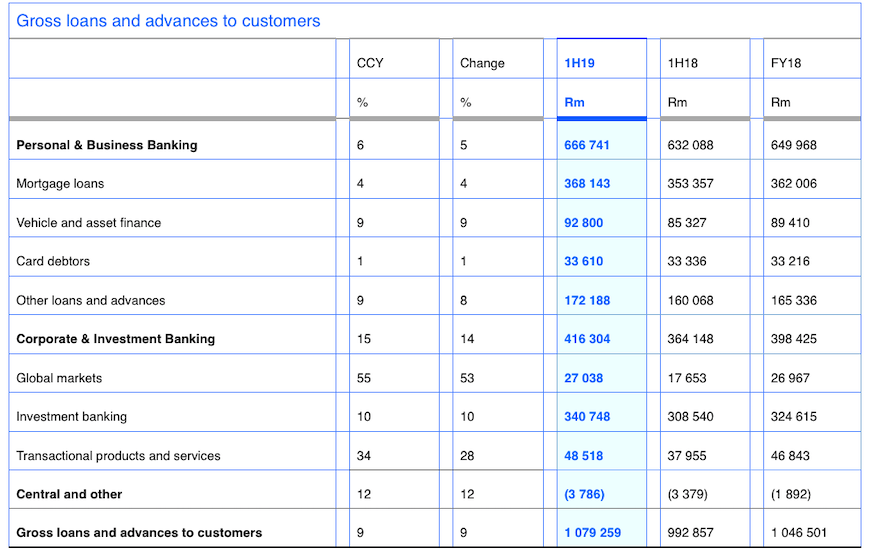 Deposits from customers grew 11% period on period to R1.3 trillion, supported by 15% growth in CIB deposits. CIB’s deposit growth was driven by client wins and greater share of wallet in SA and a growing franchise in AR. PBB customer deposits grew 5%, with stronger growth in savings and investment products as customers switched to higher yielding product offerings. SBSA’s retail deposit market share declined marginally following the roll-off of fixed deposits raised in a 2017 campaign. Growth in PBB AR’s deposits from customers, (CCY, 16%), was underpinned by continued strong current and savings account inflows in 1H19 (CCY, 17%). Our offshore operations in the Isle of Man and Jersey continued to provide the group with access to hard currency funding, totalling GBP5 billion as at 30 June 2019. 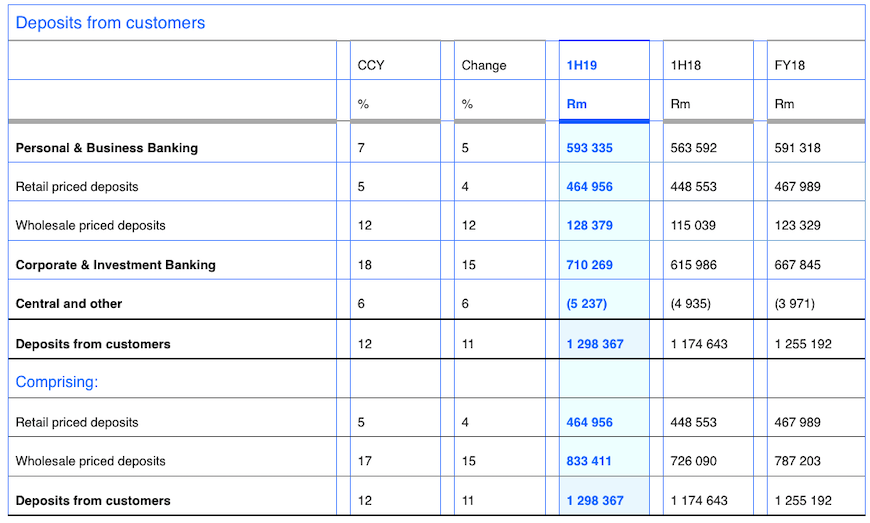 The strong focus on cost continued into 1H19. The group contained growth in operating expenses to 6% period on period and delivered positive jaws of 109 bps. This was a good result considering the customer experience initiatives and staff re-skilling and upskilling programmes under way, as well as the costs associated with the branch reconfiguration exercise in SA. Staff costs grew 5% and other operating expenses, 8%. IT costs grew 12%, on the back of higher software licensing and maintenance costs, to support increased capacity, and a lower capitalisation of costs. The adoption of IFRS 16 (accounting standard on leases), gave rise to an increase in depreciation and decrease in premises costs.

PBB SA delivered headline earnings of R6.1 billion, flat period on period, reflecting the impact of the branch reconfiguration costs combined with the continued difficult macroeconomic backdrop and an increasingly competitive environment. In the six months to June 2019, the number of branches in SA declined by 98 to 531 branches and square meterage declined 14% to approximately 314 000 square metres.

PBB AR more than doubled its headline earnings once again to R471 million (1H18, R211 million), driven by ongoing customer acquisition, increased activity levels, as well as growth in loans and deposits. The business was negatively impacted by declining rates and regulatory pressure on fees, most notably in Angola, Lesotho, Malawi, Nigeria and Zambia.

Wealth International produced an exceptional result, growing headline earnings 54% (42% in CCY) to R664 million.  The performance was driven by ongoing client acquisition, effective margin optimisation and positive endowment from higher rates in the US and UK.

CIB delivered headline earnings of R6.2 billion, an increase of 9% (6% in CCY). This is a pleasing result considering the subdued market activity levels in key markets, the difficult business environment in SA and the legislative changes and currency-related headwinds faced in some of the AR markets. CIB’s strong underlying operational performance is a testament to its growing client franchise, effective credit management and continued cost control. Revenue increased by 7% (5% in CCY). Impairment charges increased off a low base in 1H18 resulting in a CLR to customers of 40 bps (1H18, 4 bps), on the lower end of CIB’s through-the-cycle range of 40 – 60 bps. Cost growth of 5% (3% in CCY) lead to positive jaws of 156 bps and an improvement in cost-to-income ratio to 52.3% (1H18, 53.1%). During the period, CIB closed the Hong Kong office and took steps to rightsize the London office. Higher capital demand, on the back of strong growth in IB assets, higher capital requirements in Global Markets (GM) and portfolio ratings downgrades in SA, resulted in a dip in ROE to 19.3% (1H18, 20.5%).

Transactional Products and Services (TPS) delivered a solid set of results with headline earnings up 11% to R1.8 billion (1H18, R1.6 billion). Strong growth in loans and deposits, driven by client acquisitions and increased share of wallet, more than offset some of the headwinds from declining interest rates, the depreciation of the AOA and higher cash reserving requirements in Nigeria.

Despite a difficult start to the year, GM remains a sizable business that contributed R2.3 billion of headline earnings in the period. The Equities, Interest Rate Trading and Structured Solutions desks experienced headwinds, in line with markets businesses globally. The AR GM businesses performed well, providing some respite to those in SA.

This segment includes costs associated with corporate functions, as well as the group’s treasury and capital requirements, and central hedging activities. In 1H19, the segment recorded a cost of R564 million, 19% less than the prior period as costs previously held centrally were allocated to business. We continue to proactively manage the costs recorded in the centre.

Other banking interests recorded a headline loss of R320 million. ICBC Standard Bank Plc (ICBCS) recorded a loss of USD129.5 million in the period. This disappointing result comprises two primary components i) an operating loss of USD19.5 million and ii) a provision of USD110 million arising from a single client relationship. The operating loss should be viewed in the context of the difficult environment in which the business operated in the period. The single-client loss arose as a result of Philadelphia Energy Solutions (PES) operations being severely disrupted after an industrial incident, which in turn impacted its ability to fulfil its contractual obligations. PES has since filed for bankruptcy and the matter is in the courts. Standard Bank is comfortable that ICBCS is following due process and ICBCS is keeping Standard Bank updated as appropriate. The group’s 40% share of ICBCS’ loss equated to R752 million.

The financial results reported are the consolidated results of the group’s 56% investment in Liberty, adjusted for Standard Bank Group shares held by Liberty for the benefit of Liberty policyholders which are deemed to be treasury shares in the group’s consolidated accounts.

Headline earnings attributable to the group, adjusted down by R248 million for the impact of deemed treasury shares, was R875 million, 2% higher than in 1H18.

Whilst flagging global growth and the US-China trade war remain key risks to the global macro-economic outlook, SSA is expected to remain on its recovery path in 2019 and into 2020. Higher consumption and looser monetary policy will provide support. Regional real GDP is expected to grow 3.5% in 2019 and stabilise at around 4% over the medium term.

East Africa should continue to see robust growth. West Africa is expected to experience a sustained pick up, driven by a recovery in Angola and Nigeria and continued strong growth in Ghana. Mozambique’s economic recovery should continue, largely shrugging off the impact of the cyclones earlier in the year. Zambia’s growth is expected to slow to 3% but recover again into 2020. The environment in Zimbabwe is expected to remain constrained.

On 26 July 2019, Fitch downgraded SA’s outlook from stable to negative, citing the country’s deteriorating fiscal metrics; more specifically, the poor revenue outlook and the growing burden of Eskom on the fiscus. Given SA’s fiscal constraints and weak consumer and business confidence, consumption and investment are likely to remain subdued. Against a backdrop of a deteriorating fiscal position, increasing unemployment and slower than expected reform, GDP growth expectations have been reduced to 0.6% for 2019.

Whilst there may be headwinds in certain markets, the diversity of our businesses and breadth of our footprint provide us with some shelter. In addition, our on-the-ground presence and deep understanding of the macro, political and regulatory dynamics in each of these markets, enable the group to continue to support our customers and our employees, whilst managing risk appropriately. We expect balance sheet growth in AR to continue to outpace that in SA, NII to outpace NIR and the CLR to remain at the lower end of our new target range of 70 – 100 bps. We remain committed to driving operational efficiencies, whilst continuing to invest judiciously to deliver a future-ready Standard Bank Group. We remain committed to our medium-term targets of delivering sustainable earnings growth and an ROE in our 18% – 20% target range.

Recognising that the group’s sustainability, over the medium to long term, is inextricably linked to that of all our stakeholders, we remain committed to our shared value model and steadfast in delivering on our purpose of driving Africa’s growth.

The 1H19 results, including comparatives for 1H18, where applicable, together with any forward-looking information in this announcement, have not been reviewed and reported on by the group’s external auditors.